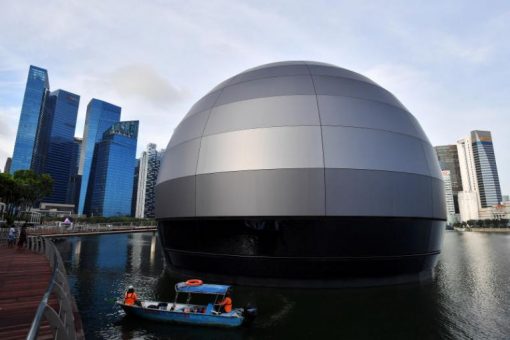 All abuzz over orb ‘floating’ off MBS

The dome-like structure in the prime waterfront location comes at a hefty price tag. Speculation is rife that it could be tech giant Apple’s new retail outpost. Design experts said it is likely using the existing foundation of mega nightclub Avalon, which occupied the space from 2011 until it closed in 2016. ST PHOTO: LIM YAOHUI

Structure adds vibrancy to area, say observers, with some believing it may be new Apple store

Is the mysterious orb-like structure sitting in the waters off Marina Bay Sands (MBS) the third Apple store in Singapore?

Speculation is rife that the structure, which appears to be “floating” when viewed from a distance, could be the site of the tech giant’s new retail outpost, as reported by The Straits Times earlier this year.

Property and retail experts said the structure’s prime waterfront location comes at a hefty price tag but will give MBS, which opened in 2010, a new vibrancy.

Property analyst Ong Kah Seng said retail rents in the Shoppes at Marina Bay Sands are some of the highest in the central region, surpassing even rental rates in Orchard Road by around 20 per cent.

As the orb-like structure sits on water, giving it more “prominence, grandeur and sense of arrival”, he said the rent for it could be another 20 to 25 per cent higher.

The average retail rent in a high-traffic mall in Orchard Road is around $40 per sq ft a month.

That puts the expected average rent for the waterfront spot in the region of $55 to $60 per sq ft a month, estimated Mr Ong.

The amount may vary, depending on whether the lease includes turnover rent, which is pegged to the tenant’s retail sales, he added.

Mr Ong said that assuming the structure is indeed an Apple store, it would be “a very unique retail lease as each brand has its special prominence… Apple as a ‘culture’ and way of living and MBS as an iconic Singapore building”.

“Unlike typical arrangements where the landlord holds more power, there’s limited upper hand in this negotiation as it is highly mutually beneficial,” he added.

Apple opened its first Singapore store in Orchard Road in 2017 and a second one at Jewel Changi Airport in July this year.

The brand is notoriously secretive about its store plans.

ST previously reported that even fellow tenants found out about the Apple store only days before its opening.

Apple chief executive officer Tim Cook, who was in Singapore earlier this month, told ST that Singapore “could use a third store”, as the Orchard Road one was “pretty full”, but he did not confirm that the domelike structure is its third store here.

French luxury brand Louis Vuitton maison boutique, which opened in 2011, is the only other “island” store on the waterfront, located a short distance away.

Design experts said the orb-like structure is likely using the existing foundation of the mega nightclub Avalon, which occupied the space from 2011 until it officially closed in 2016.

Dr Jeffrey Chan, assistant professor at Singapore University of Technology and Design’s Humanities, Arts and Social Sciences faculty, said the store, possibly constructed with a lightweight steel frame structure, would be bolted to the foundation.

The floor area will be elevated above the water by “a very safe margin” too, he added.

“Visitors will likely find the shop no different from any shop constructed on land. However, the store will appear to be ‘floating’ from a distance and I think this may be its most exciting visual draw,” said Dr Chan, who specialises in design theory.

While the size of the structure remains a mystery, the now-shuttered nightclub was reported to have had an area of around 16,000 sq ft.

Dr Lynda Wee, adjunct associate professor at Nanyang Technological University’s Nanyang Business School, said it would be fitting if the structure turned out to be an Apple store.

“Apple is about (creating) experiences, not just transacting. MBS is also about experiences, from the architecture to the natural water body backdrop,” she said.

“The more iconic structures there are, the stronger the pull to get visitors to come and see.”