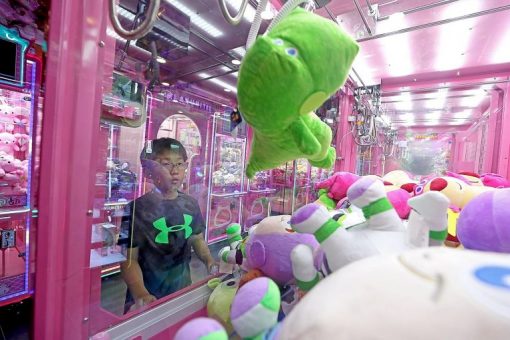 Sprouting up islandwide, claw machines are all the rage with people young and old

They are everywhere, in malls, restaurants, pasar malams, karaoke venues and even coffee shops, promising a tantalising bounty – from soft toys and ice cream to character figurines and wireless headsets – all for $1 or less.

Whether singly, in rows or taking up entire retail units, claw machines, decked in blinking lights and playing jaunty tunes, have sprouted islandwide.

Their bounty can be yours if you have the means to “rescue” these prizes from their transparent cages.

A chance to game the odds and gain control over an uncertain environment, experts say, is part of the allure of claw machines, which have seen a revival here as well as in China, Taiwan and Japan.

At a Play United outlet at YewTee Point, more than 60 machines pack the 1,800 sq ft space. A steady stream of children and adults can be seen moving from machine to machine.

The chain also has outlets in places such as Hougang Mall, Tiong Bahru Plaza, Boon Lay Shopping Centre and I12 Katong.

Its founder Kelvin Tan, 40, says the appeal of claw machines is that they can be easily integrated into shopping spaces and supermarkets.

“With online shopping and food delivery services getting more popular recently, there are fewer reasons for shoppers to set foot in brick-and-mortar stores, posing significant challenges for businesses in malls,” he says.

Claw machines are a good business strategy, he adds, because they serve people of all ages and facilitate family bonding and human interaction, which computers and electronic devices do not.

Yet another operator, The Kiap Kiap Place, filled a unit at Funan mall with 16 claw machines in June. It also owns four machines at a shop in Bugis Street.

Mr Wan Shahril, 30, director of The Kiap Kiap Place, says the thrill of the catch is key.

In the past three months, about 7,000 prizes have been won at his outlets. His most expensive prizes are soft toys from Japan, worth about $60 each.

“We often hear customers scream with excitement and share that they changed just $2 worth of tokens, not expecting to win anything,” he says.

Although his business is profitable, he envisages fierce competition ahead. “In Taiwan, the number of claw machine shops has increased exponentially over the past two years. But many of these shops have started closing down as there are simply too many similar shops,” he says.

Experts say the recent resurgence can be attributed to several factors, such as malls wanting to maximise use of retail space and yield per square foot as well as riding on the nostalgia of claw machines.

Associate professor of marketing Leonard Lee, 47, from the National University of Singapore Business School, says claw machines may offer consumers a “refreshing, more minimalist contrast” to digital devices and virtual-reality online games. “This engenders a nostalgic attachment, akin to a returning to the basics,” he notes.

Furthermore, “conquests” can be posted on social media, resulting in a “herding effect”, and new claw converts.

Children are likely drawn to the cute toys. But adults are probably lured by the illusion of “having personal control over their environment”, she adds.

“For grown-ups, the prize holds a different significance from a similar product purchased from a shop. It is something money cannot buy.

“Psychologically, these machines let users feel a sense of control and hope, similar to when people buy 4D or play a jackpot machine repeatedly, hoping to win big.”

For now at least, installing claw machines is a win-win situation for claw machine businesses and malls.

“For businesses, operating claw machines is seen as low-risk because each machine takes up very little rental space. Like vending machines, claw machines also require minimal manpower to set up, operate and maintain,” she says.

As to whether this revival of claw machines is a fad, she feels it is too early to say.

“But the good thing is that claw machines can be easily customised to give out different prizes and are small enough to be moved to other locations, such as birthday parties and dinner and dances.

“So they are likely to be around for some time.”